This particular Single Malt Highland Scotch Whisky took on the sweet, fruity flavors that were embedded in the charred wood inside the barrel.   The sweet notes of caramel, toffee, wine and fruit combine well and create a wonderfully smooth single malt whisky.

The Davidoff Geneva 2000 Series Tubo cigar is a mild, medium bodied cigar.  The cigar has a Connecticut outer wrapper which creates a pleasurable and palatable cigar.  The wrapper is light tan in color and it has a firm feel.

The country of origin for the Davidoff Geneva 2000 Series Tubo cigar is the Dominican Republic and it uses long tobacco fillers.  The long fillers enable the ash to remain intact during the smoking period.   The cigar comes with its own tube and cedar-sheath.

Once the cigar was lit, I detected the smoothness of the Davidoff Geneva 2000 Series cigar’s flavor as well as an even and smooth draw.  It was a pleasurable and effortless smoke and it created a relaxing and calm environment.  Upon the initial sip of whisky, I savored the flavor of the cigar and the whisky and they both came together smoothly.

The aroma of the smoke was pleasant and did not possess any stinging or overpowering properties.  The Aberlour 10 YO Single Malt whisky and the Davidoff 2000 Series was a hit from the start. 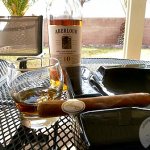 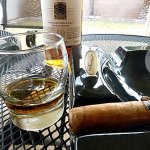 At the half-way point the Aberlour 10 YO whisky and the Davidoff Geneva 2000 Series cigar continued to remain consistent in smoothness and balance of flavor.  The sweetness of the sherry essence seemed to balance out the mildness of the cigar.  As the bourbon notes of caramel and toffee helped to smooth out any rough edges in the robust side of the cigar, I could only see goodness in both smoothness and taste from both the whisky and cigar as I approached the final stretch.

As I neared the home stretch with the Aberlour 10 Single Malt Scotch whisky and the Davidoff Geneva 2000 Series cigar, I noticed the great union between whisky and cigar.  They both demonstrated a consistent smoothness and paired up extremely well.

Since I didn’t want to waste any of this great-tasting cigar, I allowed the label to warm up enough to slip it off the cigar without tearing the tobacco wrapper. 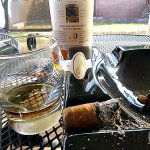 The two were made for each other.

The whisky continued to go down well with the cigar and I know you will not be disappointed with either.  I’m happy to say that I did not experience any “fierce” burn from the cigar smoke.

In conclusion, the Aberlour 10 YO Single Malt Scotch whisky and the Davidoff Geneva 2000 series cigar created a great marriage.  The double cask whisky helps to balance out the mild-medium bodied flavors of the cigar.

I would recommend that lovers of whisky and cigars try them together and let us know your thoughts.  If you have paired a different whisky with this cigar or a different cigar with this whisky please share your findings.  We would like to try other pairings and pass those suggestions on to our fans.

Note:  I’m sorry to say that the Aberlour 10 YO Single Malt Scotch whisky has been phased out by the Aberlour Distillery in Scotch.  Therefore, you may or not be able to get the Aberlour 10 Year Old whisky; unless, there are collectors or friends whose been hoarding the 10 YO whisky.

This site uses Akismet to reduce spam. Learn how your comment data is processed.

This took some skill and hours of work to get the process down but it was worth it in the end.

It's the big guys today. Poise. Balance.Character.Substance. Uplifting.Spice and all things nice. It's all in the wood.Have good weekend everybody despite new restrictions #sherry #whisky #singlemalt #scotchwhisky #scotch #maltwhiskycountry #whiskey #singlemalt #lovescotch #malt

This means it is time for a new bottle 😉

I'm a fan of @RockyPatelCigar and I can recommend the following #cigars to sample if you are new to the brand; #Dark Dominion #Maduro, #Vintage 1979, #Decade, #Winter Collection, #the Edge Maduro, #Twentieth Anniversary, #15th Anniversary and other #cigars 😎

Big shoutout to the greatest Quality Control Manager in the business @rpcigarsqc . The quality of our products is a direct reflection of your tireless dedication to excellence. Thanks for doing what you do.