Whiskies and food pairings…NOW!  When pairing whiskies, you wonder what goes best with each whiskey or whisky; you take a sip.  I also found that every whiskey style is remarkably different, each with its own character and strengths that will work well with food juxtaposed.

You will discover that certain foods go extremely well with an array of food choices.  While there’s no doubt that styles as different as scotch, bourbon, Japanese, Canadian, and many whiskies are the world will work differently across multiple food pairings, even within those styles, there will be a marked difference in how the flavors will interact.

It can be a tricky maze to navigate, but one well worth it for the budding whisky aficionado.  Here’s an overview of what whisky styles (and subtypes) that work with different pairings:

What Scotch or Whiskey to Choose?

Scotch is arguably the most variable style of whisky.  Each of its many regions imposes their unique traits on the malt, which affects what it tastes like alone and paired with food.

Islay: This island region of scotch is notorious for its bold, peat-smoked flavor. It makes quite a big statement and can alienate some whisky fans due to its robust flavor character.  Despite its flavor punch, Islays nonetheless pair very well with certain foods. To avoid overwhelming the flavor of the pairing tries to ensure the food also packs a big taste. 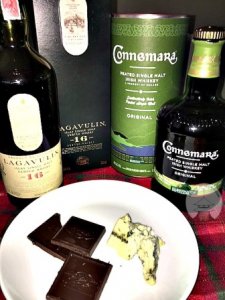 With cheeses, the stronger, the better — stilton or Roquefort can hold their own against the peat and complement the malty undertones of most Islays.  Chocolate also pairs quite well; the darker the chocolate, the better. Look for high cacao content, as the bitterness and rich flavor will stand up to the bold Islay flavor.

Speyside or Highland Malts: Most scotches from these regions are much subtler in flavor than their island-based kin. As such, the foods they go with can have a subtler flavor profile.  Soft cheeses like brie and camembert can come alive with a soft, sweet Speyside dram. 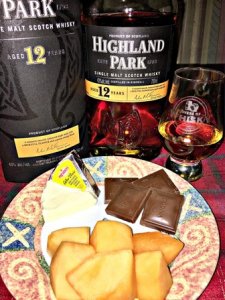 The creaminess of milk chocolate is also nicely augmented by the honey and mild iodine of a Highland malt.  Even some mild fruit like cantaloupe matches the easy-going honey flavors of these softer scotches.

Bourbon doesn’t have quite the same scotch diversity, but it still presents drinkers with a wide range of choices based on the grains used.  While all bourbon must be at least 50% corn-based, the rest can use other grains like rye to add a spicy, unique character.

Mostly Corn: For bourbon that is largely distilled with corn mash, the flavor usually tends towards the sweeter, with undertones of charcoal brought from its time spent in charred oak barrels.  This bourbon works great with barbequed meat like baby back ribs, beef brisket, or even barbequed chicken (and is even frequently an ingredient in BBQ sauces!).

Its charcoal smoke blends nicely with the smoky meat, allowing the sweet, fruity undertones to be brought forward. 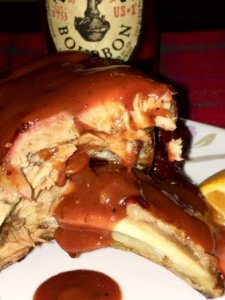 This picture shows a bottle of Michter Bourbon whiskey with baby back ribs dripping with Michter’s Bourbon sauce.

The citrus flavors of bourbon can be enhanced when paired with fruits. Be careful — too much citrus can overwhelm the bourbon. A nice sweet tangerine or Clementine will be just the right amount.

Rye it Up: The spiciness that rye grain brings to bourbons that contain it expands the possibility of its pairings.  Because of the more intense flavor, pairing it with spicy, Louisiana-style cooking becomes possible. Cajun and rye go hand in hand. 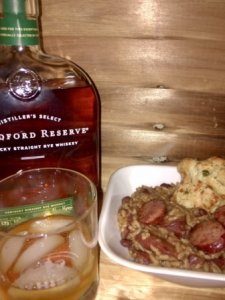 There are different fruit flavors found in the rye that do well when paired. Try pairing a dram of rye bourbon with dark cherry — the sweet tanginess is a match made in heaven for a fruity dram.

Not only are whiskies like Scotch and Bourbon highly different from each other, even within the style, but there are also major variations.  When pairing food with your whisky, consider the region’s flavor profile or substyle you’re drinking.

Big peaty Islay? Better make sure your food has the flavor to stand up for itself. Soft, mellow bourbon? You can ease back a bit and pair something softer.  The most important part is to try different combinations to find out what works for your tastes and what fails to impress. This is merely a good place to start on your whisky pairing journey.

This site uses Akismet to reduce spam. Learn how your comment data is processed.

And now it's time to find out whose Super Wish for a bottle @WoodfordReserve Baccarat Edition worth £1,500 #WhiskySanta is going to grant!

This took some skill and hours of work to get the process down but it was worth it in the end.

It's the big guys today. Poise. Balance.Character.Substance. Uplifting.Spice and all things nice. It's all in the wood.Have good weekend everybody despite new restrictions #sherry #whisky #singlemalt #scotchwhisky #scotch #maltwhiskycountry #whiskey #singlemalt #lovescotch #malt

This means it is time for a new bottle 😉